Home > Blog > Caregiving > A Caregiver’s Guide to the FAST Scale 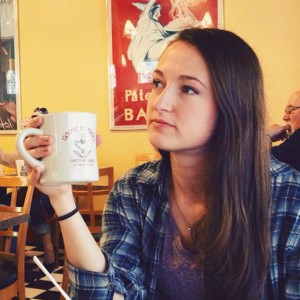 A Caregiver’s Guide to the FAST Scale

If your loved one has recently received a dementia diagnosis, you may be searching for ways to understand more about their condition and its progression. Dementia is a term that covers the gradual cognitive degeneration that can occur due to several diseases, the most common being Alzheimer’s. Luckily, there are some tools you can use to understand more about your loved one’s condition. One of those tools is the FAST scale. The FAST scale is an acronym stands for Functional Assessment Staging Scale. This informative tool was developed by Dr. Barry Reisberg, an expert in geriatric psychiatry, as a way for health care workers and family members to understand the different stages of dementia.

Using this tool can help everyone make more sense of this condition and prepare for the next stages as they approach. There are several other tools used to understand dementia stages, including the Global Deterioration Scale and Clinical Dementia Rating. Whereas many of these scales focus on cognitive decline, the FAST scale measures an individual’s ability to carry out daily functions.

Using the FAST scale is a helpful way for caregivers, family members, doctors, and medical providers to stay on the same page when it comes to caring for dementia patients. Let’s take a deeper look at this tool and how it is used.

Many tools for understanding dementia focus on cognitive decline and place the phases of the condition into just a few categories. Describing dementia as either early, middle, or late-stage is quite common, but the FAST scale breaks it down further into seven stages. The FAST score dementia stages may differ depending on the form of the condition your loved one has. These stages are characterized as follows:

Each of the stages on the FAST scale has several associated factors, and your loved one may be one stage cognitively, and another stage functionally. Unfortunately, it is important to note that this tool is not a concrete indicator of your loved one’s condition. Their symptoms may vary, but this scale can help you understand and discuss their condition.

While the FAST scale is a scale for the functional aspects of dementia, we’ll look at a few of the cognitive elements you can expect along with these stages as well. Let’s take a deeper look at each stage of the Alzheimer’s FAST scale and how they may present themselves.

Stage two of the FAST scale involves subtle memory loss that the individual observes in themselves. They may first notice stage two symptoms emerge in subtle ways, like misplacing car keys, forgetting an acquaintance’s name, or missing a step in their usual daily routine. Individuals in this stage may also notice a need to keep more lists to remember their routines, recipes, or other information they would usually keep track of mentally.

Often, individuals keep this knowledge to themselves, so it is not uncommon for loved ones to miss stage two of their loved one’s dementia altogether. Experts say the symptoms of this stage are also commonly considered normal for elderly adults.

Stage three of the FAST scale is when coworkers and family members are more likely to notice the cognitive and functional decline in their loved one. Individuals in this stage may still be working, but they are likely to experience noticeable memory loss that disrupts their usual routines. Coworkers may notice that the individual forgot to carry out one of their work duties or is unable to concentrate. A family member may notice that the individual is not on top of their bills or home organization. People at stage three may repeat questions or stories.

In this stage, people that are close to the individual may come together to discuss the fact that something does not seem right with this individual. The individual has usually noticed these changes, but they may still deny them or avoid seeking help. They may also attempt to cover up their memory loss or other forms of decline. Stage three can last around seven years.

In stage four of the FAST scale, an individual has experienced further decline and may need help performing certain tasks like planning an event or cooking a meal. This stage is difficult because the individual is still aware that they are declining cognitively and functionally. They become exhausted by trying to keep up with the daily routines of life. They may express increased anxiety, anger, or even denial as a result of this awareness. As a caregiver or family member, this stage will require quite a bit of patience. The individual with dementia may begin exhibiting more dangerous behaviors as well, like forgetting to turn off the oven.

By stage four, the individual with dementia will no longer be able to cover up their cognitive and functional decline. They may experience a common symptom called sundowning, which involves becoming increasingly confused in the late evening and nighttime hours due to the exhaustion they face during the day. Stage four can last around two years.

Stage five is often considered the most challenging dementia stage for caregivers. The individual with dementia no longer has the awareness they did in stage four. They are experiencing further cognitive and functional degeneration, but they have lost the ability to understand their decline. This means the patient is likely less anxious than they were in stage four, but more dependent on the people around them. They’re no longer working to keep up with their usual responsibilities, so those usually fall on the family and caregivers.

This is also the stage that the patient is likely to forget the people that are important to them. At this stage, the patient  will need to have consistent assistance, so you may move in with them or make arrangements to move them to a care facility. They’ll need help with basic tasks like choosing their outfits, and they may begin to pace or wander. Stage five can last around one and a half years.

During stage six of the FAST scale, your loved one will need assistance with basic care needs like bathing, using the restroom, and dressing themselves. They may experience incontinence at this stage, as well as difficulties with mobility and speech. If you have not moved your loved one to a care facility by this stage, you may want to consider it now. Your loved one will need nearly constant supervision and support, and this can be difficult for one person to handle on their own. If this is not possible, you can consider hiring a part-time caregiver to share the responsibility with you.

At stage six, a dementia patient likely will not remember their immediate family members like a spouse or children. They may bring up memories from their childhood, believing themselves to be in that phase of life again. At this stage, a dementia patient may still be verbal, but they will mumble or be difficult to understand. Stage six can last between three to ten months.

Stage seven of the FAST scale is considered the final stage, or end stage of dementia. Speech declines significantly at this stage, or the patient becomes nonverbal. Their mobility has regressed from difficulty walking to difficulty sitting and holding their head up. A patient in stage seven may not have as much desire to eat or drink. They will lose physical abilities and communication, including the ability to smile. At this stage, a patient’s body will often stiffen or contract. Stage seven can last around a year, and will end with the individual passing away.

Dementia patients will usually not be eligible for hospice until stage seven of the FAST scale, unless they have other conditions that affect their prognosis. Let’s take a look at a few of the conditions involved with determining qualification for hospice care.

Alzheimer’s and other diseases that cause dementia are inevitably challenging for everyone involved. However, tools like the FAST scale can help you understand the disease and your loved one’s symptoms. Whether you’re a caregiver or a family member, knowing these stages can help prepare, and understand when it is time to reach out to hospice. They can also help you understand how to connect with your loved one and take care of them throughout the dementia journey. 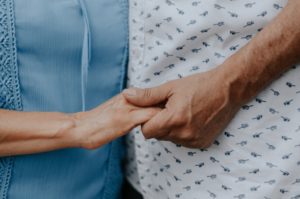 The sudden development of a Kennedy ulcer may be alarming to family, but it’s a common symptom of end of life. Your loved one may 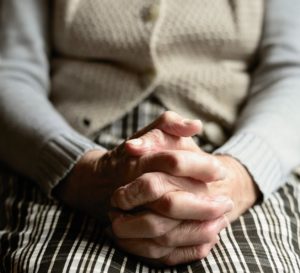 Is mottled skin normal for seniors?

Mottled skin can be a source of confusion for seniors and their families. However, it’s a common occurrence during end of life. Let’s go over 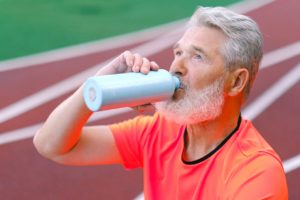 Red flags of dehydration in the elderly

Staying hydrated is important for people of all ages, but seniors are especially vulnerable to dehydration and its effects. Seniors already have a lower volume